Wedding traditions in Korea and Japan 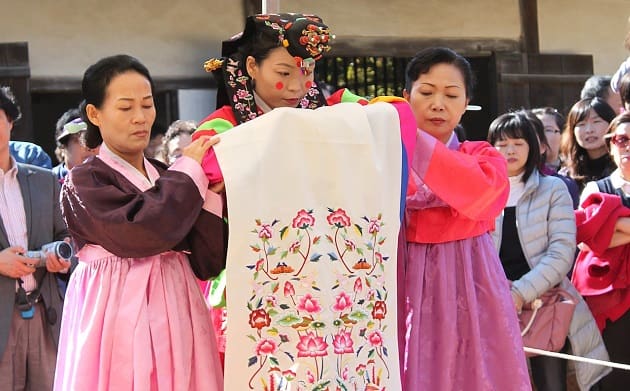 You might be looking for a UK-based venue where to celebrate a traditional Korean or Japanese wedding, or you might have arrived at this page because you have been invited to one and don’t know what to expect! Either way, for this post we have put together some information about traditional weddings in the Far East. We hope this will inspire your wedding, or clarify some aspects of the ceremony you’ve been invited to.

In this blog post we will concentrate mainly on South Korea, a beautiful country in the easternmost side of the Asian continent, situated on a peninsula. Its wedding traditions are subtle, yet exuberant – just like the country itself.

In Korean weddings, also known as Honrye, the bride’s attire is truly spectacular. The bride’s dress is known as hanbok. It includes a jeogori (a short jacket with long sleeves); worn atop a chima, a beautifully embroidered full-length skirt.

The groom’s wedding costume is no less jaw-dropping. Overall, this costume is called a gwanbok and consists of a jeogori (just like the bride’s, a short jacket with ample sleeves), worn on loosely fitting trousers.

Japan is a gorgeous country situated in a group of islands, on the westernmost side of the Pacific Ocean. Unlike Korea, Japan was never invaded by mighty China. Therefore, Japanese traditions never mixed with those of China in a direct way, and Japan was able to maintain more of a cultural independence.

Japan’s religion is also based on syncretism; but instead of Korean shamanism, Japan amalgamated Confucianism and Buddhism with its home-grown religion – Shintoism. In Japan, therefore, most traditional weddings are celebrated according to the Shinto tradition.

These traditional shinto ceremonies are held in a shrine. Traditional Japanese brides usually wear a white kimono to symbolise purity, named shiromuku. They might wear an iro uchikake, or colourful outer robe, or perhaps a kurobiki furisode, a black and white patterned kimono dating back to the Edo period. Traditional Japanese grooms wear a haori (jacket) as well as a hakama, loose fitting pants.

If you are attending someone else’s wedding…

If you have been invited to a Far Eastern wedding in one of our venues, be prepared to witness one of the most exquisite ceremonies of your lifetime. It’s unlikely you will be required to wear Korean or Japanese dress, but if you are willing to incorporate some Oriental touches, why not put a few origami cranes in your hair, to get in the mood? It will be a very well-considered detail that the bride and groom will surely appreciate. For gents, why not wear an origami crane in your lapel?

If you are organising your own wedding…

You might not want to go all out with your decorations, but have you thought about having a Korean or Japanese themed wedding, with little finishing touches reminding you of your heritage? For example, you could serve Korean or Japanese food, give Korean, or Japanese gifts as favours.

Moreover, if you are the lucky couple tying the knot, we think that the mixture between the Far Eastern traditions hosted in a contrasting UK venue can look absolutely stunning!