It has been several years since the same-sex marriage bill was passed by parliament. With the exception of Northern Ireland and some British Overseas Territories, gay couples can now enjoy a marriage officially recognised by the state. The first gay marriage in the UK took place on 29 March 2014, and ever since gay couples have been producing some of the greatest wedding photos ever. We take a look at some of the most romantic and creative ways gay men have rendered their marriages on camera.

A favourite for many years, this type of wedding photo features you and your beloved lost in rustic woodland. Photographers “This Modern Life” did just that for this couple, and we love the whimsy and sheer romance of it. A double photo is a great idea, featuring a close-up of the couple and a juxtaposed image of them walking hand-in-hand into the distance.

This shot featured in Equally Wed  is gorgeous too, with the couple holding hands framed by a row trees. The fact their pink bow ties match the pink of the tree blossom is an awesome touch.

The endless warmth and charm that natural light creates in a wedding photo is perfect! And nothing will put on a smile on your face like this photo of a Pablo and Andres, captured during the golden hour. Taken by Victor Lax Photography, it evokes a dreamlike sensation. It’s also clearly full of love, the couple cuddling in the dusk as twilight approaches.

Still as popular as ever, the vintage theme never disappoints. These stylish images taken at a rustic barn are incredibly romantic. Our favourite shot by Hayley Savage and Matthew Oliver features the two grooms stood next to a vintage Rolls Royce, holding their suitcases and dressed like true gentlemen.

A wedding with a specific theme always helps in creating memorable shots, while giving the photographer some room to be creative. 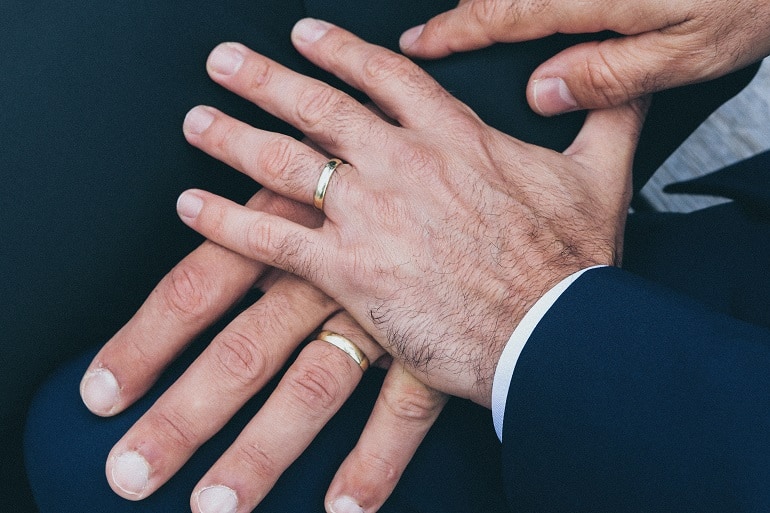 Sometimes the simplest shots are the best. That’s why we chose this photo to round off this post. The couple are snuggled up next to each other in a booth without any kind of background. They’re dressed in their suits, holding a sign that reads: “He Loves Me”.

The same can be said of this photo, of the couple stood by an old antique box camera. Grand backgrounds aren’t necessary to produce a photo that you’ll treasure for the rest of your lives, as proven with this elegant but loving picture.