Weddings in North America don’t follow a single set of rules, particularly because the population is so mixed and diverse. In the entire continent, it is easy to find wedding celebrations with European, Asian, or African roots.

Despite this, it is fair to say that most weddings in North America follow the white wedding routine, which is the one we are most acquainted with here at Country House Weddings, since most of our brides and grooms also favour this kind of fairytale wedding.

This kind of wedding takes its name from the colour of the bride’s dress, but it has come to mean an entire set of traditions and rules. These traditions may vary ever so slightly from the UK to North America, and may be peppered here and there with elements borrowed from other traditions. In North America, this would typically have to do with the particular heritage and/or ethnicity of either the bride and groom, which may be mixed; or simply with their taste.

It is fair to say, however, that the most widespread of wedding traditions in North America find their origins in UK. For example, the saying “Something old, something new, something borrowed, and a silver sixpence inside your shoe”, dates back to the Victorian era.

Some wedding traditions might never have  heard of it – elsewhere in this blog we have explored Indian and Chinese wedding traditions – and indeed might not pay attention to it. Not so in North America, where couples usually follow the saying, more for fun that for superstitious reasons. With one exception – the last part never really caught in America! 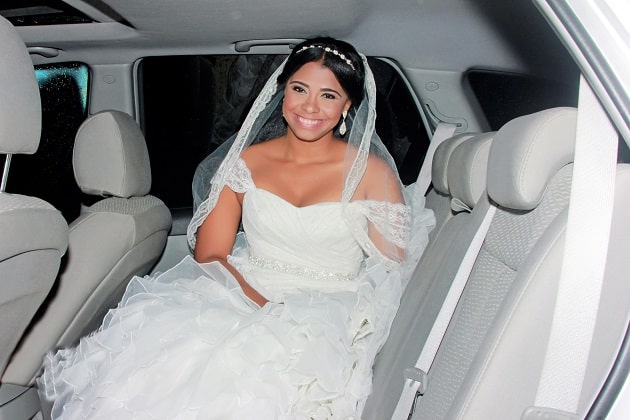 In fact, the very tradition of the white wedding gown has its roots in British Monarch Queen Victoria’s wedding to Albert Saxe-Coburg. Ever since then, the white wedding dress came to symbolize wealth, as well as the purity of the bride, and it was quickly popularised in North America.

There are differences, though, between UK and North American weddings. These differences wax and wane with time, depending on fashion or the amount of cultural exchange between the two countries at any point in time.

For example, in North America it is customary that the groom faces the aisle to watch his bride walk towards him upon entering the ceremony. In the UK, the groom usually doesn’t look, and only sees the bride when she has arrived at the altar. One famous instance of this was when Prince William was waiting for his wife-to-be Kate Middleton, to arrive at the altar. Following the tradition, Prince William didn’t turn around. His brother Harry did, and told William: “Wait till you see her”. We must admit, we really cherish this tradition, for all that momentum buildup!

Planning an American wedding in an English venue?

Given the similarities between the two, an English venue can only add a touch of the old to your perfect North American wedding. You have come to the right place! Browse our page today for more wedding inspiration. We hope to see you soon!